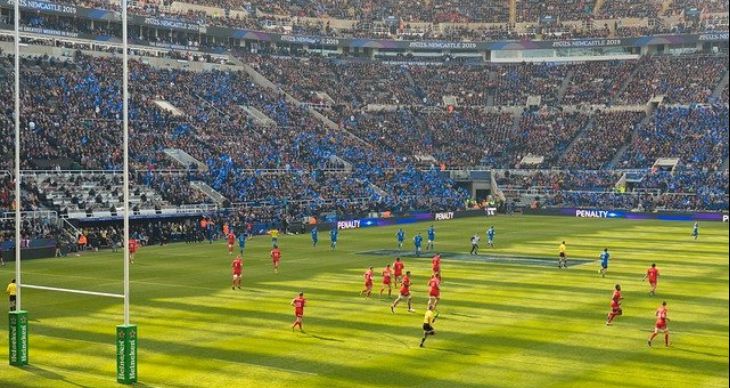 The opening weekend of the Guiness Six Nations saw an impressive run of fixtures. Ireland came out of the blocks flying with a 27-9 win over Wales and look like the one's to watch. Scotland secured back-to-back Calcutta Cup's for the first time ever in a dogged performance against England and will be looking to carry that momentum into the coming weeks. Meanwhile, France didn't perform to their best but managed to come away with a strong victory over Italy on a drizzly night in Paris.

As good as the Six Nations was last year (as long as you were not an England fan), it is clear to see after this weekend how big a part the crowd has to play. The atmosphere during the England and Scotland match was electric, a cacophony of noise followed by moments of calm perfectly encapsulated the mood surrounding Murrayfield.

Despite only being week 2; this upcoming weekend of fixtures could possibly define each team's success for the competition. Scotland will have another tough grudge match against a Welsh side with a point to prove. Wayne Pivac's side started the tournament with an emphatic defeat and they are hoping to kick back and get their campaign off the ground. Conversely, Scotland triumphed in a nervy affair and will be looking to keep their momentum going. Big names like Russell and Hogg will need to make more of an impact on the game if their success is to continue.

There have been a plethora of reviews in the media and the sporting world of Eddie Jones's decision to substitute Marcus Smith, the man who scored all of England's points. Jones's faith in his 'finishers' failed to get England over the line and considering Smith's recent heroics with a string of late wins for his club side, will Jones risk the backlash by making the same move in future matches? One thing is for certain though, England need to put points past Italy and develop more of a flow in attack. Their lack of fluidity in the Scottish capital cost them dearly and they cannot afford to make another error like that if they have their eyes set on wrestling back the Championship.

With the bookies' favourite pre-tournament being France, the pressure is on this weekend with the matchup between France and Ireland set to be a real crunch match, no doubt the winner will be hotly tipped to take home the Championship. After a slow start against the Italians, they picked themselves back up and displayed an impressive box of tricks and plays to out-maneuver a stubborn Italian side. It ended up being a comfortable victory but the Azzurri pressed hard especially in the opening stages of the match, forcing France to come from behind, eventually stretching out to win by 27.

With the two in-form northern-hemisphere sides meeting this weekend Ireland will be looking to repeat their performance of four years ago, where they laid their foundation for the Grand Slam. France have come out on top in the latest two meetings but everyone knows that games are not won on past results. Both sides will have to turn up to have any chance of walking away with the points. Figurehead Johnny Sexton has hit back at French scrutiny over him saying it is "nothing new" and he [Sexton] is looking forward to facing the French team after missing the match last year due to injury.

After a 66% success rate of predictions in our blog 'Sports to watch over Xmas' Teamo going to attempt to predict the final table of this year' Championship. We have also spoken to our friends over at Sportplan Rugby to see what they think of this year's competition. Here is what they had to say:

"We're going for France in this one with the home advantage at the Stade De France potentially proving vital. They've still got a lot more to give after their 37-10 win over Italy and we believe they've got the talent to win their first Six Nations title since 2010. They came into the tournament on the back of an impressive Autumn International period including a dominant 40-25 victory over New Zealand and have the likes of Anton Dupont and Roman Ntamack currently on top of their game."﻿

As we don't want to copy Sportplan, Teamo have gone for a slightly different order. We believe that the luck of the Irish will prevail this weekend and set them up for another Championship. France will follow close behind with Scotland, England and Wales following. Bringing home the wooden spoon will be Italy.

Think neither set of predictions are right? Send us a message saying who you think will win and why?

That's all for now! We love to hear your feedback so please get in touch and share your comments!

Teamo in the Community: Spencer Lynx